Disc Herniation | Bauerfeind New Zealand
Get 10% OFF YOUR FIRST ORDER. SIGN UP FOR OUR NEWSLETTER!

Disc Herniation: Cause of lower back pain

Lower back pain can arise from a variety of different causes. Most people assume that the pain is stemming from the muscles or joints in the back or that they are experiencing sciatica pain. Often, however, a herniated disc is responsible for the back pain.

In cases where low back pain caused by a disc herniation is coupled with other symptoms, such as loss of muscle function, immediate action must be taken to avoid substantial damage.

If the symptoms are less acute and a diagnosis is made early enough, a herniated disc can commonly be treated without surgery.

Chiropractic or physiotherapy, along with medical back braces or orthoses, can be used during the rehabilitation process for pain relief caused by disc herniation and can potentially reduce its overall severity. Many people who have experienced one or more disc herniations in their life live relatively pain-free with the condition without surgical intervention. 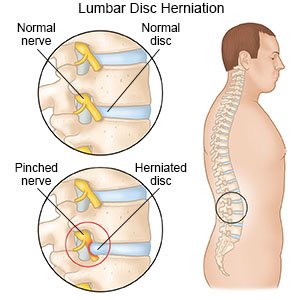 The intervertebral discs act as shock absorbers for the spine. They sit between each vertebral body to create a buffer for any force or friction applied to the spinal column, ensuring that there is an even distribution of the pressure.

Herniated disc injuries commonly happen when the back receives a jolt in a car accident or due to excessive physical exercise in improper form. There are varying degrees of injury to an intervertebral disc, from a milder case of a disc protrusion where the tissue just bulges, to a more severe scenario where the gel-like core of the disc exits its structure as a full herniation or prolapse. Herniation of the C6-C7 intervertebral disc is most common, pinching the nerve and causing nerve root pain.

Disc injuries, including disc protrusions or herniations, can go undetected for long time periods as the discs do not produce severe pain themselves. When the herniated disc matter compresses a neighbouring nerve root, intense pain can occur, which can hinder or be aggravated  by normal movements.

The lumbar spine, the area of the lower back, more commonly experiences disc herniations, compared to the mid or upper spine. Factors that increase the vulnerability of the disc prolapse include heavy physical activity, poor posture, inactivity and obesity, all increasing the risk of damage to the disc tissue.

Symptoms of a herniated disc

The site of a herniated disc in the spine can often be gauged by where the pain is experienced. If the herniated disc tissue pushes on the lumbar spinal nerves, pain is felt in the low back, versus a cervical disc herniation that will give pain in the neck region.

The symptoms from a herniated disc, however, do not necessarily remain isolated to the site of the injury. In the case of a lumbar disc herniation, for example, the pain can travel down into the legs and toes causing foot pain.

Increased pressure within the spinal column, caused by sneezing, coughing or defecating, can increase  the intensity of the pain. Additional symptoms can also occur in the legs, such as tingling or weakness of the leg muscles. If the sufferer has an accident involving their bladder or bowel function, emergency intervention is required. Untreated herniated discs can cause urinary problems,


Treatment for a herniated disc

It is a common misconception that every intervertebral disc herniation must be treated with surgery. More conservative therapies; including chiropractor, physiotherapy, medical braces or orthoses and pain-relieving medication can help in faster recovery of back injuries.

The rate of surgery performed on disc herniations is continually decreasing and commonly used for ongoing and more severe cases. Medical experts have now started advising patients of herniated disc to undertake a multi-disciplinary approach with light activities (instead of advising strict bed rest), dieting and weight loss as well as utilising medical aids to reduce pain.


How do I relieve herniated disc pain at home?

Analgesic and anti-inflammatory medications, along with using a herniated disc heating pad are commonly suggested to enable sufferers to perform the movements required of their daily activities.

Prescribed rehabilitation exercises can be utilised and are recommended from the time that physical movement is virtually pain-free, along with remedial massage using essential oils or hydrotherapy. In the absence of any complications, a typical course of chiropractic or physiotherapy treatment for a herniated disc is completed in six to eight weeks, with rehabilitative exercises to be continued thereafter.

In order to provide support, pain relief and enhance the sufferer’s capabilities during their treatment and rehabilitation period, the use of medical braces and orthoses can be advantageous. Bauerfeind’s extensive range of back supports can be used throughout the rehabilitation process of disc herniation, accommodating to all severity levels. If conservative care for the herniated disc is unsuccessful in improving the condition, surgery is likely to be prescribed.

As with any surgery, intervertebral disc surgery has its risks. Intestinal paralysis, nerve irritation or complications of scarring can be associated with disc surgery. Other more general risks of wound healing complications and thrombosis are also likely.

Surgical intervention for an intervertebral disc is intended to minimise ongoing consequential damage caused by the herniation. For instance, the pressure produced on the nerves that control the bowel and bladder function due to disc herniation can cause urinary and faecal issues. Prolonged pressure on motor nerves can also lead to muscle weakening or even paralysis.

A discectomy (the surgical removal of part of or the whole disc) help in decreasing the pressure on the surrounding nerve roots to relieve pain and avoid permanent nerve damage.

Rehabilitation exercises should be continued regularly with the assistance of back supports  for several weeks following surgery for an optimal recovery. Back supports will help to stabilise the spine whilst providing support to the back muscles during daily activity.


Back brace for disc herniation and stabilisation of the lumbar spine

Medical back braces or orthoses can be a valuable part of a therapy plan for a herniated disc. Bauerfeind’s  LumboTrain® Back Brace provides effective support to the lower portion of the spine for pain relief and to optimise recovery. The brace features a gel pad with massaging nubs over the lower back region, which work to relieve muscle tension. The LumboTrain’s breathable, hypoallergenic material is flexible and conforms to the body’s contours, making it both comfortable and supportive to wear for extended periods. For more severe cases, the LumboLoc Forte with lumbar insert provides advanced pain relief and significantly stabilises the lumbar spine. Flexible aluminium stays are featured to further support the back and facilitate correct posture in the lumbar spine. *Originally featured on Bauerfeind Australia: https://www.bauerfeind.com.au/blogs/expert-advice-for-common-injuries/disc-herniation
SINCE 1929
MADE IN GERMANY
SUPPLIER TO ATHLETES
AWARD WINNING
PRECISION FIT
OFFICIAL SUPPLIER
Back to blog
Book a video consultation